Dear friends and enemies of Stilum Curiae, Archbishop Carlo Maria Viganò sent us these considerations on the Nativity scene of St. Peter, which aroused so much amazement in those who saw it. Have a good read.

In the center of St. Peter’s Square there is a metal tensostructure, hastily decorated with a tubular light, under which stand, disturbing as totems, a few horrible statues that no person with common sense would dare identify with the characters of the Nativity. The solemn background of the façade of the Vatican Basilica increases the chasm between the harmonious Renaissance architecture and the undignified parade of anthropomorphic pins.

It matters little that these atrocious artifacts are the result of students of an obscure Institute of Art of Abruzzo: those who dared to put together this scar at the Nativity scene did so in an era that, among the countless monstrosities in the pseudo-artistic field, has not been able to do anything beautiful, nothing that deserves to be preserved for posterity. Our museums and galleries of modern art are overflowing with creations, installations, provocations born from sick minds at the turn of the sixties and seventies: unwatchable paintings, sculptures that provoke recoiling, works whose subject or meaning is not understood. And the churches also overflow, which were not spared, always in those inaustic years, by daring contaminations of “artists” appreciated more for their ideological and political affiliation than for talent.

For decades architects and artisans have been making horrific structures, furnishings and furnishings sacred to such ugliness as to leave the simple disgusted and to scandalize the faithful. From that malapianta, in a migrationist climate of Bergogliano, could not fail to derive the bronze bark, as a monument to the unknown migrant,placed on the right of the Berninian colonnade, disfiguring its harmony, whose oppressive bulk sinks the sanpietrini into the consternation of the Romans.

It should be remembered that this year’s blasphemous nativity scene was preceded by the equally sacrilegious one of 2017, offered by the sanctuary of Montevergine, a destination for pilgrimages of the Italian homosexual and transgender community. This anti-nativity scene, “meditated and studied according to the dictates and doctrine of Pope Francis”, should depict alleged works of mercy: a man on the ground, a corpse with a dangling arm, the head of an inmate, an archangel with a garland of rainbow flowers and the dome of St. Peter in ruins. [1]

Similar attempts, in which the Nativity is used as a pretext to legitimize unhappy cimenti, have been the cruccio of so many faithful, forced to suffer the extravagances of the clergy and the desire for innovation at all costs, the deliberate will to desecrated – in the etymological sense of making profane – what vice versa is sacred, separate from the world, reserved for worship and veneration. Ecumenical nativity scenes with unlikely mosques; immigrant nativity scenes with the Holy Family on the raft; nativity scenes made of potatoes or scrap.

It is now evident even to the most careless that these are not attempts to update the Christmas scene, as the painters of the Renaissance or eighteenth century did, wearing the procession of the Magi with the customs of the time; these are rather the arrogant imposition of blasphemy and sacrilege as the anti-theophany of the Ugly, as a necessary attribute of Evil.

It is no coincidence that the years in which this nativity scene was made are the same in which the Second Vatican Council and the reformed Mass saw the light of day: aesthetics is the same, and the inspiring principles themselves are the inspiring principles. Because those years represented the end of a world and marked the beginning of contemporary society, just as with them began the eclipse of the Catholic Church to give way to the Conciliar Church.

Putting those ceramic artifacts in the furnace must have required many problems, which the industriousness of the teachers of that Abruzzo school overthrew by breaking them into pieces. The same happened at the Council, where ingenious experts managed to force into the official documents doctrinal and liturgical innovations that in other times would be confined to the discussion of an underground group of progressive theologians.

The result of that pseudo-artistic experiment is a horror all the more gruesome, the greater the claim that the subject represented is the Nativity. Having decided to call a “nativity scene” a set of monstrous figurines does not make it such, nor does it meet the purpose for which it is exhibited in churches, squares, houses: to inspire the worship of the faithful towards the Mystery of the Incarnation. Just as calling Vatican II a “council” has not made its formulations any less problematic and has certainly not confirmed the faithful in the Faith, nor increased the frequency at the sacraments, let alone converted crowds of pagans to the Word of Christ.

And as the beauty of the Catholic Liturgy has been replaced by a rite that excels only in squalor; how the sublime harmony of Gregorian chant and sacred music has been banished from our churches to make tribal rhythms and secular music resonate with you; how the universal perfection of the sacred language was swept away by the Babel of vernacular languages; thus the momentum of ancient and popular veneration conceived by St. Francis was frustrated, to disfigure him in his simplicity and tear his soul.

The instinctive revulsion that this nativity scene arouses and the sacrilegious vein that it reveals constitute the perfect symbol of the Church of Bergogliana, and perhaps precisely in this ostentation of brazen irreverence towards a centuries-old tradition so dear to the faithful and the little ones, one can understand what is the state of the souls who wanted it there, under the obelisk, as a challenge to Heaven and to the people of God. Souls without Grace, without Faith, without Charity.

Someone, in a vain attempt to find something Christian in those obscene ceramic statues, will repeat the mistake that has already been made in letting our churches faint, in stripping our altars, in corrupting the simple and crystal clear integrity of the Doctrine with ambiguous smokiness typical of heretics.

Let us recognize it: that thing is not a Nativity scene, because if it were a Nativity scene it should represent the sublime Mystery of the Incarnation and the Birth of God “secundum carnem”, the adoring admiration of the shepherds and the Magi, the infinite love of Mary Most Holy for the divine Infante, the amazement of creation and angels. In short, it should be the representation of our state of mind before the fulfillment of prophecies, our enchantment to see the Son of God in the manger, our unworthyness for the redeeming Mercy. And instead you can see, significantly, the contempt for popular piety, the rejection of a perennial model that recalls the immutable eternity of the Divine Truth, the insensitivity of arid souls and death before the Majesty of the Child King, to the bent knee of the Magi. You can see the bleak grayness of death, the gloomy abction of the machine, the darkness of damnation, the envious hatred of Herod who sees his power threatened by the Child King’s Saving Light.

Once again, we must also be grateful to the Lord in this trial, apparently of less impact but still consistent with the greatest tribulations we are suffering, because it helps us to bring down from our eyes the bandages that make them blind. This irreverent monstrosity is the mark of the universal religion of transhumanism desired by the New World Order; is the explicitation of apostasy, immorality and vice, ugliness erected as a model. And like everything that is built from the hands of man without God’s blessing, indeed against Him, it is destined to perish, to disappear, to crumble. And this will happen not because of the change in power of those who have different tastes and sensitivities, but because Beauty is necessary handmaid of Truth and Goodness, just as ugliness is companion to lies and wickedness. 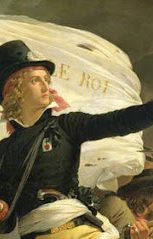